Crocodile in Bangalore pothole - Novel way of protest against BBMP

Crocodile in Bangalore pothole - Novel way of protest against BBMP


Mysuru bsed artist Badal Nanjundaswamy used his brush to create a lake out of giant pothole on Sultanpalya Main Road that was filled with rainwater and placed a giant crocodile model in it.

Frustrated by the failure of the BBMP to repair a giant pothole and a broken water pipe in the middle of the main road, a city-based artist, Baadal Nanjundaswamy, planted a 20 kg life-sized crocodile in the 12-feet-long pothole and painted the pothole green. 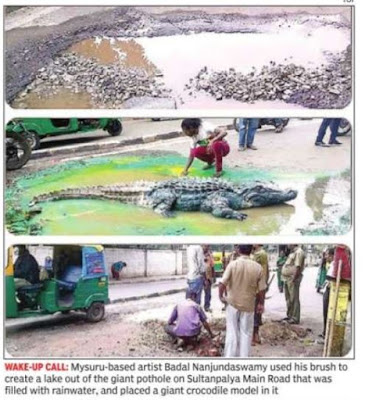 The 36-year old artist is not new to these forms of protest. He had earlier created a mouth of 'Yamaraj' in an open manhole to show that it was a death trap. The civic authorities reportedly fixed it within a day.
- June 20, 2015
Email ThisBlogThis!Share to TwitterShare to FacebookShare to Pinterest
Labels: Entertainment, People ; Society