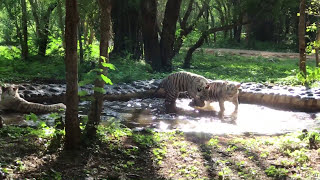 Facebook Video
White Tiger Facts White tigers are widely found in the dense jungle, mangrove and swamps. These species weigh around 140 – 300 kg (309 – 660 lbs). The average lifespan is 10 years in the wild. They become fully mature after 3 – 4 years. The period of gestation lasts for 103 days. Females litter 2 – 3 cubs. The length of the white tiger measures around 1.4 – 2.8 meters (41/2 – 9 feet), with the tail measuring 3 – 4 feet (90 – 120 cm). The newly-born cubs weigh around 1 kg (2 – 3 pounds).These juveniles begin to hunt after 18 months or so. The white tiger showcases unique white coloration which makes it rather more popular in zoos among other exotic animals. According to a rough estimate, around 15,000 Bengal tigers result in a white tiger. The natural breed of white Bengal tigers is too rare to take place. These tigers are bigger in size as compared to the orange species. They have blue-colored eyes, and their fur is pale in color. The mean weight of white tigers measure around 400 – 550 lbs, with the length measuring at 9 – 11 feet. The female tigers lay 1 – 6 cubs and these juveniles stay with their mother for about 2 – 2.5 years of age. White tigers are not found commonly in the wild; however, in captivity they are available in hundreds of numbers. They are the only tigers that are more readily found and are in greater numbers in captivity than in the wild. There are around hundred white tigers all throughout the India. White tigers for the most part are associated with each other. Inbreeding is needed for the recessive gene liable for the white color fact. The average lifespan of white tigers is low as compared to the orange cats perhaps due to the mutated genes. Besides, inbreeding depression can be another reason for the short life expectancy. There is still a debate among scientists about the white tigers in Siberia and their probability of occurrence of recessive gene in Siberian tigers is low. White tigers have similar visionary problems as that of standard orange tigers. Contrary to a belief, white tigers do not have crossed eyes and black striped. There is a general belief that white tigers undergo a wide range of birth defects which is not quite right as many white tigers are as healthy and their orange counterparts. There is a general belief that white tigers rely more on caretakers because of mental disorders which is incorrect. No scientific evidence has been proposed in favor of this idea. Variation in tiger’s behavior is expected and normal and it arises out of their own personality traits. These tigers tend to hunt at night and spend the whole day in their den while sleeping. White tigers are solitary animals.
Please Like and Comment on Duggu n Dakshu TV's video.
Facebook Page :
https://fb.me/duggundakshutv
Youtube Channel :
https://www.youtube.com/channel/UCS-0qJ3i1OoljV7v27p7ScA
- July 03, 2020
Email ThisBlogThis!Share to TwitterShare to FacebookShare to Pinterest
Labels: Travel, Videos