Kids Indoor Games - Othello
OBJECT OF THE GAME:
The object of the game is to have the highest number of your colour discs on the board at the end of
the game.
STARTTNG THE GAME:
Each player takes 32 discs and chooses one colour to use throughout the game.
Black places two black discs and white places two white discs as shown in figure 1. The game always begins with this set-up. 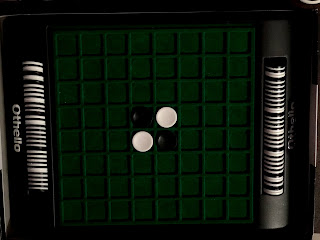 A move consists of"outflanking" your opponent's disc(s), then flipping the outflanked disc(s) to, your colour.
To outflank means to place a disc on the board so that your opponent's row ( or rows) of disc( s) is bordered at each end by a disc of your colour. (A "row" is defined as one or.more discs in a continu-· ous straight line - vertical, horizontal or diagonal.)
HOW TO PLAY:
1. Black always moves first.
2. If on your tum you cannot outflank and flip at least one opposing disc, you miss your tum and your opponent moves again. However, if a move is available to you, you must place a disc.
3. A disc may outflank any number of discs in one or more rows in any number of directions at the same time. See figures 2 and 3. 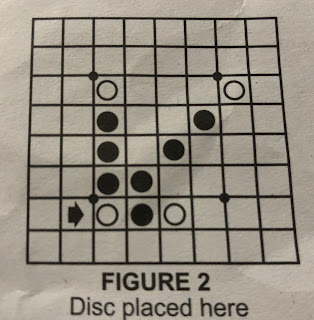 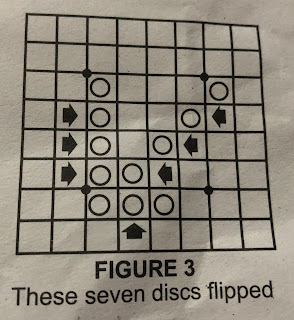 4.     You may not skip your own colour disc to outflank an opposing disc. (See Figure 4). This disc only outflanks and flips white disc I .
5.     Disc( s) may only be outflanked as a direct result of a move and must fall in the direct line of the disc placed down. (See Figures 5 & 6) 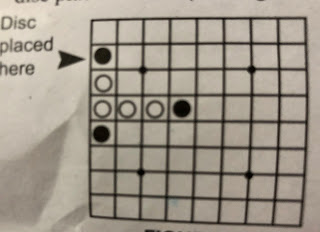 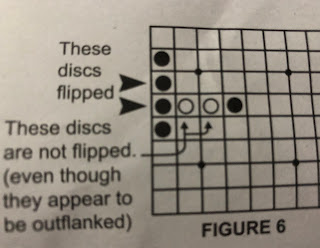 6. All discs outflanked in any one move must be flipped, even if it is to the player's advantage not to lip them all.
7. A player who flips a disc which should not have been turned may correct the mistake as long as the opponent has not made a subsequent move. If the . opponent has alre a d y move d , · 1t · is too 1 ate for change and the disc(s) remain as is.
8. Once a disc is placed on a square, it can never be moved to another square later in the game.
9. If a player runs out of discs, but still has an opportunity to outflank an opposing disc on his or her tum, the opponent must give the player a disc to use. (This can happen as many times as the
player needs and can use a disc.)
ENDING THE GAME:
When it is no longer possible for either player to move, the game is over. Discs are counted and the player with the majority of his or her colour discs on the board is the winner.
NOTE: It is possible for a game to end before all 64 square are filled.
SCORING:
Players wishing to score their games may do so by determining the margin by which a player won a game. Simply subtract the smaller number of discs from the larger.
Players may also set up their own method of scoring e.g. establishing a pre-determined number of games or points to win by in a series of games.
- July 03, 2020
Email ThisBlogThis!Share to TwitterShare to FacebookShare to Pinterest
Labels: Duggu n Dakshu TV, Videos